Despite being known primarily as a lover of books, I think I should make it clear from the start that I love Peter Jackson’s three films that make up his adaptation of the Lord of the Rings.  I don’t think Tolkien’s classic work could ever be completely captured in its entirety on film, but I really don’t think that anyone else could have done it any better – they really are fantastic.

I could try and nick pick here and there, how I wished they’d portrayed a particular part, this way or that, but I won’t bother – the film adaptation is just that, an adaptation, and it is a very good one.

The films have done a lot for the fantasy genre as well.  They showed how the incredible advances in in CGI meant that virtually any imagined concept or world can now be achieved via the medium of film.  It used to be thought that fantasy novels could only be achieved in either books or animation because of the limitations of film, and the cost of special effects.

But although the cost still remains high, the top end restrictions in what is and isn’t achievable has been lifted and the only limiting factor now is the size of the budget and the scope of the writer’s imagination.  I don’t think we will see a whole host of new fantasy novels making it to the cinema, because film producers will still want to know they are onto a winner before they risk the quantities of money we are talking about.  But judging by how eager they were to carry on using Tolkien’s work with the three Hobbit movies – when it was clear that one or two films would have been more than adequate – they can see the rich potential of fantasy movies.  In fact, I have heard that each of The Hobbit movies made $1 billion each, so it’s not surprising they made three of them!

Either way, the films are magical, and they have brought a whole legion of fans to the realm of Middle Earth who would otherwise never have heard of the Ring of Power,the Lady Galadriel, the spider Shelob, and the Hobbits of the Shire.

So I find myself torn, because as much as I love the films, I worry at how many people in future generations will now ever read the book?  I am sure that the book sales went up on the films release and immediately after, but how long will that last?  Gone with the Wind was originally a Pulitzer Prize winning novel before they made the film.  But how many people are even aware of that, let alone read it now? Everyone has seen the film so why bother?  But that is such a shame when it comes to The Lord of the Rings because you can only fully immerse yourself in the world of Middle Earth if you lose yourself in the books.  There are passages of the books which simply cannot make the transition across without the films slowing down to a crawl, so rightly they were omitted.  You might not think that this matters, but you are then missing out on so much of Tolkien’s rich and vibrant world. 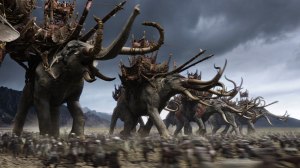 When the companions in the The Fellowship of the Ring approach Moria, in the novels you learn a lot about the back story of the mines and how the Dwarves had wished to take them back forty years before.  This is difficult to show in the film, so they simplify the story.  I can understand why they did it, but you miss a part of the story, and never know the sense of loss and sadness that you experience when you learn of the dwarves fate in the books, or the fear as the drums start beating in the deep.  There are plenty of other examples of course, the Elves of Mirkwood, getting to know the Tree Ents of Fangorn, learning of Shadowfax, the sadness the Hobbits feel when they return to the Shire.  All these stories were necessarily cut short, simplified, or cut out completely.  I am not criticising those decisions, but only regret that their stories will now be forgotten altogether if the books become forgotten too…