Over the past week and a half, I have posted several articles on the Lord of the Rings.  I don’t think anyone can deny the importance of Tolkien’s work to the fantasy genre, but maybe it is time to start looking beyond Middle Earth, to find the next great classic fantasy novel.  There have been several pretenders to the throne, various novels or series of books that for a time have come close to the popularity of Tolkien’s work, but so far, none have lasted the test of time.  I can’t possibly list them all as there are far too many but I will go through a few of the past, present, and future claimants to the throne…

The Dragonlance series by Weis & Hickman – Back in the 1980’s, before computer video games hit their prominence, the game fantasy enthusiasts played was Dungeons and Dragons: a role-playing game played with character sheets, dice, and active imaginations.  The popularity of this game was in part fuelled by the massive popularity of the Dragonlance fantasy series of books with Tannis Half-Elven, Flint the Dwarf, the twins Caramon and Raistlin, and the Halfling Tasslehoff.  The books were exciting and fitted in perfectly to the role-playing world where every adventuring party was comprised of an Elf, a Dwarf, a warrior, a wizard, and a Halfling.  It was unsurprising where the inspiration for these characters came from, as the writers were keen Dungeon and Dragon enthusiasts themselves.

However despite their one time popularity and being a good read, I think modern readers of fantasy would now find these concepts a little dated, and the days when these novels outshone The Lord of the Rings have long past.

Wheel of Time series by Robert Jordan (and later novels by Brandon Sanderson).  I feel I have been reading these novels all my life.  I read the first of the Wheel of Time series as a teenager, thinking I was starting just another fantasy trilogy.  However, when I reached my mid to late thirties, I found I was still reading them!  The series hit book 14 before it reached its conclusion in The Last Battle.  Sadly the original writer of the first 11 books past away half way through book 12 so Brandon Sanderson had to come in and finish the series.  Fortunately, he was given extensive notes on how Robert Jordan wanted the story to end, so the many readers of the series weren’t left wondering.  Despite the novels epic scale and the long journey that a multitude of readers, like myself, spent from childhood to adult reading them, I doubt the series will ever be considered in the same breath as The Lord of the Rings.  I really liked the books but the critics were never quite so kind (they said it was too long!) so I doubt it will ever achieve the necessary gravitas to be taken seriously as a classic of the genre.  However, it could make a fantastic T.V. series or set of films.  Tolkien’s The Hobbit was unnecessarily stretched into 3 films when 1 or 2 would have done – with the Wheel of Time, you won’t be running out of material anytime soon. 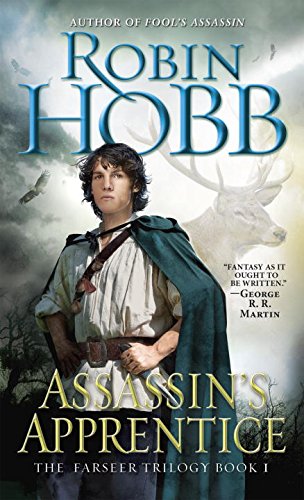 The Farseer series and Liveship traders by Robin Hobb.  This is possibly the closest candidate we have available to be considered a modern classic in the fantasy genre.  Robin Hobb writes beautifully, her descriptive power is second to none, and her characters are always well thought out, with genuine personalities of their own.  These two series have different characters and plot-lines, but share the same world, so just as with Tolkien’s Middle Earth, it becomes richer and more real with every passing novel.  Will her novels pass the test of time and be loved down the generations as Tolkien’s have been?  Only time will tell.

Drenai saga by David Gemmell.  Since the death of David Gemmell, an annual award has been setup in his name to honour and find new and exciting fantasy writers.  This was to honour the name of the man who was such a great talent in writing heroic fantasy novels.  All his novels are fast paced and exciting, full of heroic deeds and terrible enemies.  It is the characters of his novels, and in particular those from the Drenai set of books, that are key to Gemmell’s writing.  Each character has a convincing back-story, personality and set of emotions.  Gemmell’s fantasy realms may not quite have the level of detail of Tolkien’s Middle Earth, but his characters are just as real and that for me is the most important aspect of writing.

Game of Thrones by George R.R. Martin. When I first read the first novel in this series back in 1999, I knew I’d found something special.  I didn’t quite expect the astounding success we see now, with adverts in every newspaper and magazine, together with billboards and posters in every bus shelter and train station, but then I never took into account the series becoming a worldwide Television hit with HBO.  Even so, even back then I was sure this was more than the average set of fantasy novels and as the series continued I became only more convinced of this.  When the TV series started, I loved this too, marvelling at how well they’d managed to convert his world of Knights, white walkers, grand castles and huge battles to the screen.  However, the incredible success of the TV series has put an element of doubt in my mind – not because they’re not good, they’re absolutely fantastic, but because now the TV series has caught up with the books, the story looks set to continue in that format first.  Will the remaining novels ever be written now? I don’t know, and even if they are, will they be as good?  Maybe how we judge success in the field of fantasy writing has changed.  Maybe the world is no longer looking for a set of novels to be as acclaimed as Tolkien’s but instead want to rival its success in the box-office or the level of merchandise available.  Certainly more money can be made that way, but I think that would be a shame.  The world deserves great fantasy novels, will you be the person to write the next great classic?