I wrote a piece a couple of weeks back regarding the novels of  Bernard Cornwell’s: ‘The Last Kingdom’ and the TV series of the same name which has just come out on the BBC.  This brought me to the attention of Alan Lancaster, who loves this period of history and writes extensively on the subject.  Much as he liked the series, he pointed out some issues where the series differs from the real story behind one of the great migrations into the British Isles.  I thought it only fair that I give him a chance to set the record straight so I asked him to write a post on Anglo-Saxon Britain and the coming of the Vikings.  Alan Lancaster is real authority on the subject and writes his own historic novels on the subject, you’ll find links to some of his writing at the end of the article. Okay, so over to Alan!

A Brief Story of Aengla Land

The Romans had left Britain around seven years before a council of Celtic tribal elders or chieftains came to the conclusion that they needed someone, outsiders, to keep the warring factions from tearing society apart. The council became known later as ‘Vortigern’, mistaken by earlier historians for one particular overlord or ‘Bretwalda’. ‘Vortigern’ would be the Jutish word for the leaders responsible for the call for help.

Late in the fifth decade of the 5th Century Hengist and Horsa reached the south-eastern shore on land held by the tribe known to the Romans as the Cantii. These were brothers, Jutish war-band leaders with a following of several large, broad rowing ships of the type that later brought the Aengle and Seaxan migrants to this isle. The promised reward was of land and gold. When the Celtic leaders went back on their promise the Jutes sought to press home their claim in a pitched battle. With Horsa fell a large number of his and Hengist’s men, although the Celts were the real losers in the exchange. The outcome was a kingdom carved out of Cantii lands. They also established themselves on the island they named Iuta, later Wiht, calling themselves Iutae.

Hard on the heels of the Jutes the Saxons landed in the east and south.  In several waves, they struck out from the Thames valley and southern shore, taking over Iuta and pushing the Celts west. Their kingdoms would be East, Middil, Suth and West Seaxe, and Suthrige – what would become Wessex after eastward expansion by a determined war leader named Cerdic. 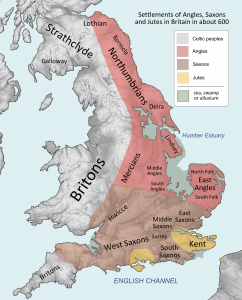 To their north came the Aengle, into East Aengla, Middil Aengla, Deira and Beornica – the latter two kingdoms at times combining as Northanhymbra. Middil Aengla expanded west and south, in time becoming Mierca/Myrca under the warlord Penda. By the 7th Century territories were consolidated, with Raedwald – a protégé of the Christian king of Centland Aethelberht – as king of the East Aengle, Penda the pagan king of Mierca with lands that stretched from the North Sea in the east, the Hymbra and Treonta to the north, the Seoferna in the west, the Seaxan kingdoms to the south and Raedwald to his south-east. Oswy, brother of Oswald slain by Penda at Maserfield (Shropshire) would be king of Northanhymbra. This kingdom was bounded in the west by the Irish Sea as far north as the Ribble, inland along the Ribble and north along the eastern edge of the British kingdom of Strathclyde and to the North Sea from east of Cardeol (Carlisle). Ida ‘the Flame-bearer’, an earlier king of Beornica had pushed the northern boundary of his kingdom to the Firth of Forth, engulfing Dinas Eidin (Edinburgh). Later Aengle kings of Beornica would push to the Tay and find themselves face-to-face with the Scots, pushing eastward from their conquests in Alba (having crossed the sea a century or so earlier from Ulster). The Northanhymbran Aengle would at times be faced with enemies on all sides, Offa’s Mierca becoming later overlords. A battle would be fought in the north against the Picts at Nechtanesmere (Dunnichen) where Ecgfrith was killed and Beornica would be pushed back towards the Tweed.

Offa meanwhile expanded Mierca south to engulf West Seaxan territory as far as the Themese. He modelled himself on the more powerful Charles ‘the Great’ (Charlemagne) of the Franks. One of his noteworthy achievements was the establishment of a western boundary against the Britons (Seaxans called them ‘Wealsh’, meaning ‘foreigners’, although in Deira the Aengle kings allowed the Celts to stay in their tribal area of Elmete (between Leeds and Selby). Earlier Penda had allied himself with the Britons against King Oswald and his brother Oswy/Oswiu.

The war-band leader Cerdic and his successors had overrun the kingdoms of Middil Seaxe, Suth Seaxe, Suthrige, Centland and East Seaxe by the 8th Century. 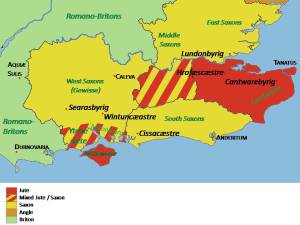 By the time Aelfred came to the kingship of West Seaxe his father and older brothers were beset by the Danes’ ‘Micel Here’ (Great Army) under Ubbi, Haesten, Sigurd ‘Snake-eye’ and Ivar ‘the Boneless’, sons of the Dane Ragnar ‘Lothbrok’ (Leather Breeks) who had died at the hands of King Aelle of Beornica. They had defeated a Northanhymbran army under Aelle and Osferth, king of Deira at Eoferwic, and despatched both kings. A puppet king would rule the kingdom of Jorvik, as would another in Mierca, a third in East Aengla after King Eadmund was slain. Eadmund had abandoned his men near the coast, and fled to the church at Byrig (later Bury St Edmund) where the Danes cornered him and mocked his lack of courage before bowmen sent him to his maker.

Another Danish war-band leader, Guthrum, would agree a treaty with Aelfred. In the dead of winter after the Christmas feast Aelfred and his men were resting at Cipanham (Chippenham) when Guthrum thundered in with his men. Aelfred fled west with the few of his men not cut down by the Danes, to Aethelney in northern Sumorsaetan. Here he would have to hide from Guthrum whilst the Danes combed the wetlands (of the Somerset Levels near Glastonbury) and offered a reward to anyone who could tell them Aelfred’s whereabouts. When Aelfred was able to summon a big enough army – outlaws were given an amnesty in exchange for their help against Guthrum – Aelfred tackled the Danes at Ethandun (Edington) and defeated them. There were further clashes with Guthrum before another treaty was agreed at Wedmore whereby Mierca was divided into west and east (the Danelaw) along the old Roman road, Watling Straet, (and land east of the River Lea). Deira became the Danish Kingdom of Jorvik under Halfdan. Eastern Mierca was settled by the Danes, administered from the Five Boroughs: Deoraby, Laegerceaster, Lindcylne, Snotingaham and Staenford (Derby, Leicester, Lincoln, Nottingham and Stamford) in Danish fashion with areas subdivided into Wapentakes, land measured in carucates. Western Mierca, along the boundaries of Ceaster, Staefford, Tamwyrthig and Northanhamtun (Chester, Stafford, Tamworth and Northampton), was ruled through an ealdorman, Aethelred for Aelfred. Tamwyrthig was the old capital of Mierca in the days of Penda and Offa. Guthrum withdrew to his kingdom of East Aengla, accepted Christianity and adopted the name of Aethelstan.

After Aelfred’s death his son Eadward ‘the Elder’ took the reins of the kingdom, his sister Aethelflaed ruled western Mierca on his behalf and raised her nephew Eadward’s son Aethelstan. On Eadward’s death in AD 924 Aethelstan became king of Mierca and West Seaxe. Jorvik meanwhile had been ruled by the Dyflin (Dublin) Dane Sigtrygg ‘Caech’. On his death in 927 Aethelstan took Jorvik. The Northanhymbrans yielded, signalling West Seaxan expansion and realising Aelfred’s dream of a united kingdom under a West Seaxan king. Aethelstan would now have to take on a new force of Norse, Wealsh, Scots and Dyflin Danes under Olaf Guthfrithsson, who laid a renewed claim on the kingship of Jorvik. With him was the Scots king Constantine II and the Strathclyde Britons. In AD 937 at Brunanburh, (a site now unknown, thought to be somewhere on Merseyside) Aethelstan defeated them, to be acclaimed Bretwalda. He never married and was succeeded by half-brother Eadmund in AD 939.

This was the first attempt at a united kingdom, which was then threatened by Eirik Haraldsson, nicknamed ‘Blood-axe’, first in AD 948 and again AD 952-4. He would be lured to the high moors at Stainmore and killed along with his retainers.

For another forty-eight years peace would reign, until the hapless Aethelred ‘Unraed’ took the counsel of his Witan in AD 1002 and sent out men to ‘deal with the Danes’ he was warned plotted his downfall. This would be fateful for him. The St Brice’s Day Massacre on 13th November cost him dear, as one of the victims turned out to be Gunnhild, the sister of the Danish king Svein Haraldsson, ‘Forkbeard’. Svein repeatedly came with a large fleet to claim Danegeld for the killings. Each time Aethelred paid up: 36,000 pounds in AD 1007, 48,000 in AD 1012. In AD 1014 he came with an army as Ragnar’s sons did a century and a half earlier, determined to take the kingdom. Aethelred fled to Northmandige (Normandy) with his queen Emma and young sons, Eadward and Aelfred… Cut a long story short, he came back that year with a large army just as Svein died suddenly at Gagnesburh (Gainsborough).

The sixteen-year old Knut Sveinsson withdrew to Denmark to seek more men and ships from older brother King Harald, and came back to tackle Aethelred and his son Eadmund ‘Ironside’ in AD 1016. Aethelred died in Lunden, leaving Eadmund to hammer it out with Knut. Eadmund was badly wounded at Assandun (Ashingdon) east of Lunden and fled west. After another disastrous defeat Eadmund offered Knut a share in the crown, but died of his wounds. Knut was now king of Aengla Land. When Harald died a year or so later Knut had both kingdoms. Son Svein (by Aelfgifu of Northanhamtun) would be regent in Norway; Svein’s brother Harold ‘Harefoot’ would rule for Knut in Aengla Land.

Marriage with Aethelred’s widow Emma gave him another son, Harthaknut. A dynastic struggle would result in AD 1035 with Knut’s premature death, with Harthaknut having to fend off neighbour Magnus Olafsson of Norway after Svein was sent scuttling home. Harold ‘Harefoot’ would be his brother’s regent in Aengla Land until he decided to take the crown for himself. In short Harold II died and Harthaknut came to claim the throne, offered a half share to half-brother Eadward but died ‘in his cups’ at a wedding feast. History repeated itself, and Eadward took the kingship, as well as the hand of Earl Godwin’s daughter Eadgytha. Another dynastic squabble awaited and the rest you probably already know… Or do you? More soon, savour the read,