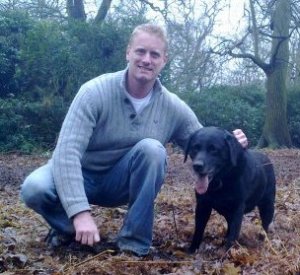 Thomas Brooke lives in London where he works in the exciting, and sometimes crazy, fashion world.  He is also a committed writer and he spends as much time as he can in his beloved Northumbrian hills, where up until recently could be seen walking with his black Labrador Fergus, who sadly passed in January 2015.  Fergus was a constant companion to the writing of the novel and prevented many writers’ tantrums.

Roman Mask is Thomas Brooke’s second novel, although this will be the first available for sale.

Fergus in the moors of Northumberland where I did a lot of my writing.