What are the first steps we take to become writers?  The most important starting point, is to love books ourselves, and to be avid readers.  Kory M. Shrum The successful author of the Jesse Sullivan fantasy series, who has well over 300 Amazon reviews for her  novel Dying for a Living has taken this a step further and explains in this insightful guest post how a writer should read.  She has given strong examples to support her case and shows how much we can learn from other masters of the craft.  So I will pass you over to Kory…

10 books that will teach you to read like a writer.

Before I tell you about the books, let me answer this question: Why SHOULD you read like a writer? It’s important to read like a writer for a couple of reasons.  A reader who is reading like a reader does so for pleasure mostly. Or to be informed about a certain topic or idea. Contrastly, a writer reads to study to the craft. A writer will be more likely to examine the story as someone who wants to recreate it. Imagine you are a boat builder and you see a gorgeous sailboat cutting waves in the harbor. It’s so beautiful! Look how it turns! Look how the willow white sails ripple. Admire the sunlight cutting across the pale pine hull. It’s gorgeous and you can’t help but oogle it. But don’t stop there. Why is it beautiful? And what can you do to create something as lovely?
Read like a writer.

The Tale of the Time Being by Ruth Ozeki

This book should be read for structure. Ozeki seamlessly weaves two narratives following 16-year-old Nao in Japan and adult novelist Ruth in Canada. It’s full of humor, beautiful prose, amazing characters—but the structure is particularly worth noting. If you read this novel closely, you can’t help to learn a lot about how to craft a well-built tale. Runner-up: The Vampire Chronicles by Anne Rice. She is a master of the framework tale as well as knitting the past and present together without a hitch.

Dialogue is hard to do. “Oh geez, why Tim?” “Well, Bob let me tell you. To the spaceship!”
Thankfully there are a few novelists out there who have written beautiful novels that can show us how it’s done. One such novelist is the amazing Toni Morrison, particularly her novel Beloved. In the book the conversations never seem forced between characters and it’s just the right about of tension and character development. But don’t take my word for it. Read it like a writer yourself. Runner-up: The Hitchhiker’s Guide to the Galaxy by Douglas Adams

The Stand By Stephen King
Few people can craft a character like The King—Stephen King that is. And of all the novels I could choose from (he’s one prolific guy!) I chose The Stand. Not only because The Stand has an amazing cast, but it has quite the ensemble. There are several POV characters so you’ll gain intimate insight into an array of very different people. And for those of you put off by the idea of reading “horror” fear not. This isn’t really a horror story. It’s more of an Outbreak, oh everyone got sick and society collapsed novel—with some mysticism mixed in. And besides, the education you’ll gain in character development is unbeatable. Runner-up: Harry Potter series by J.K. Rowling 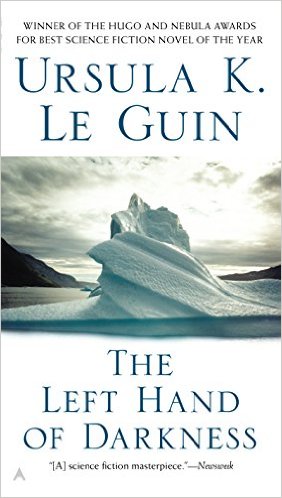 The Left Hand of Darkness by Ursula K. Le Guin
The mark of good world building, is that an entirely new world is created and yet remains recognizable. But not in some cheap, let’s-just-slap-a-new-label-on-it, kind of way.  Le Guin has created a world where there is no gender binary and reproduction is unlike anything we know. The politics, the world order, all of it is unlike anything we know. And it’s done so well! The level of detail is astounding and there’s plenty to learn. Runner-up: the Dune series by Frank Herbert. Another great example of entirely new world rendered palatable by a writer’s pen.

So much tension! There’s a love story, a father-son conflict, ecological/world-ending problems, and a growing up saga. Every page keeps you turning because you want to see how this ends. So for an excellent education in how to turn the page, read this SF thriller. Runner-up: Jane Austen. Not much excitement (read: car chase, crash, heroics) happens in Austen’s novels (Pride, Prejudice and Zombies aside), yet she was very good at building tension between characters. And funny to boot! So don’t let your aversion to classics steer you away from some excellent material.