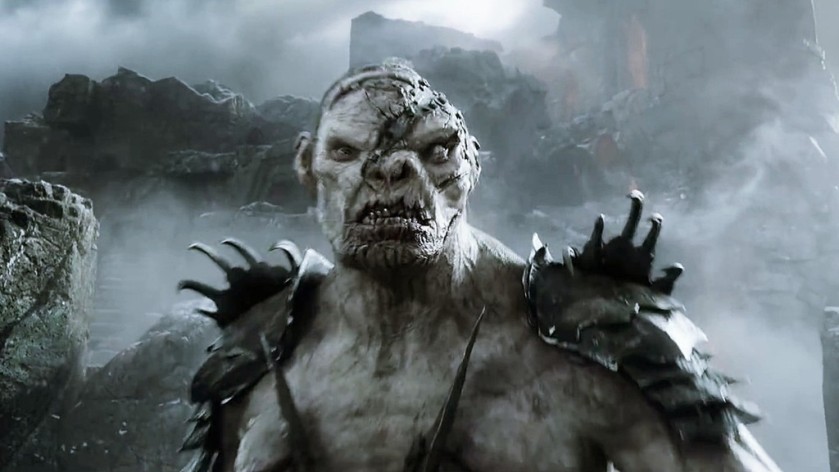 Where else to start than the mythical warriors of Middle Earth, that we meet in the writings of Tolkien.  The term Goblin and Orc are actually synonymous in the world of Middle Earth, however Tolkien tended to refer to them as Goblins in The Hobbit, whereas by the time you reach The Lord of the Rings, the term Orc is more common.

In Middle Earth, before the Dark Lord Sauron, there was Melkor – Sauron’s one time master.  It was Melkor who bred the first orcs, by corrupting enslaved elves, by the slow arts of cruelty and his malignant magic with which he infused his dark will.  This is because evil in Middle Earth isn’t capable of true creation, and so the orcs were born as a cruel mockery of the elves who they had first descended from.  The orcs then bred and multiplied in vast numbers, disgorging from the lands of Mordor to swamp Middle Earth with their cruelty and spite.

Grotesquely malformed, squat bodies, with longs arms and crooked backs, and misshapen fanged faces.  They are a worthy foe of the free races of Middle Earth.  Armed with scimitar and shield their great strength and ferocity, aided by their cruel and wicked nature make them opponents not to be under-estimated.  They often poison their blades and barb their arrows, so don’t expect any form of gallantry from these evil and cunning soldiers of darkness.

There are many forms of orcs in Middle Earth, and they commonly fight and war amongst themselves, only the strong will of a leader such a Sauron or Saruman (who created his own form of Half-orc called the Uruk-hai) can control them. 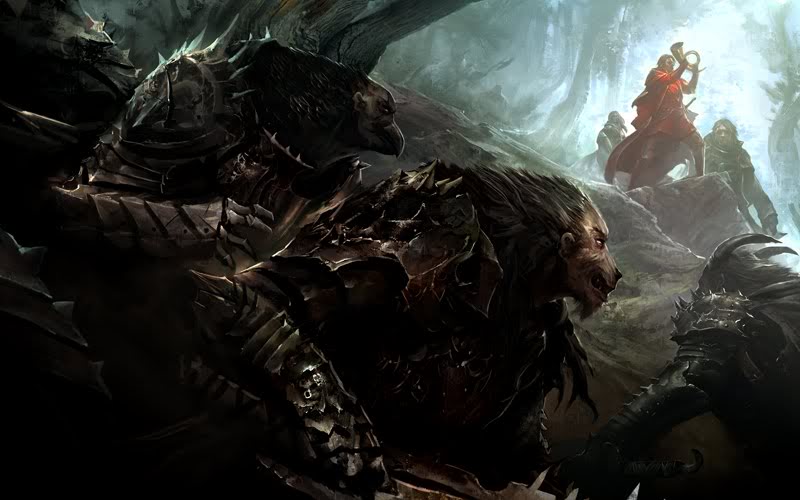 Trolloc. From the Wheel of Time series, by Robert Jordan.

Half man, half beast, the trollocs were created by the forsaken Aginor during the war of shadow.  He combined human’s with the genetic makeup of several different animals, to create a force of formidable soldiers, to overwhelm the forces of light.

They vary greatly in appearance, depending on which animal they inherit the closest bond with.  Some have the long muzzle of wolves, others the beaks of birds, or the snouts of rams or goats.  Generally far larger than men, and physically stronger, their intelligence tends to vary as much as their appearance.  Some have the power of speech, whilst others can only squawk , growl, or grunt at one another.  Often what is most disconcerting about the trolloc is their too human eyes, which appear so unnatural peering out of their beastly faces.  The cowardly and violent nature of the trolloc made them poor soldiers initially, until a rare form of trolloc started appearing, roughly only one in twenty coming out as something far more terrifying, called a myrddraal.  These were then used to control the other trollocs. 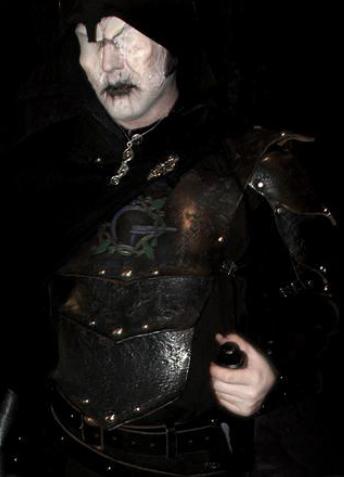 Myrddraal.  From the Wheel of Time series, by Robert Jordan.

To control the trollocs, we have the myrddraal.  In appearance they look like a tall human with grey pale skin, and a terrifying gaze from an eyeless skull.  The stare of a myrddraal alone can induce paralysing fear amongst their foes, and the trollocs they herd are also terrified of their unnatural offspring.  Myrddraal have the ability to link with a band of up to five hundred trollocs (known as a fist) and bend them to their will, so the trollocs become a much more effective fighting force, with the cold intelligence and discipline of the myrddraal guiding them.  This has the unfortunate side-effect of all the trollocs dying if their myrddraal is killed.  But this in no easy feat to achieve, as each myrddraal is a master with the long serpentine blades they carry, and do not die easily, even if dealt many blows that would certainly be lethal for human opponents. 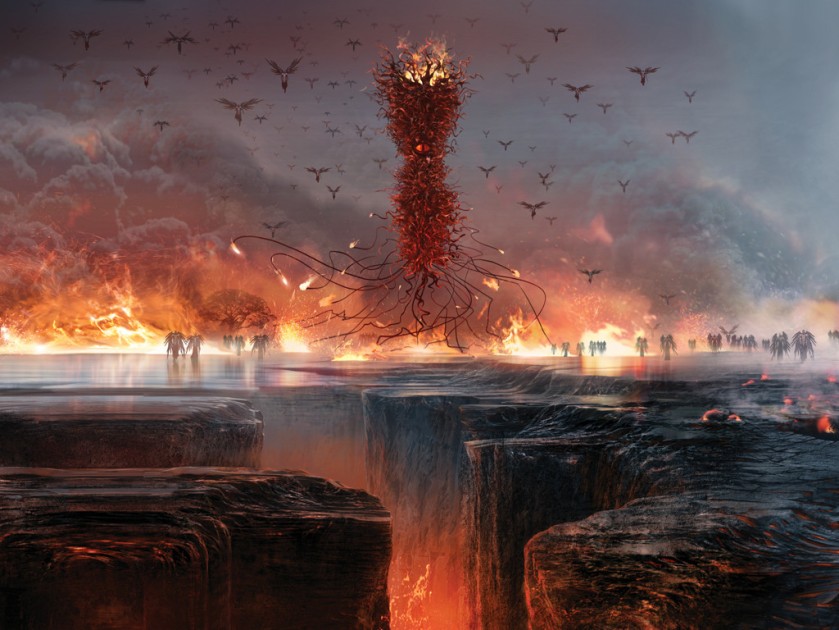 Parshendi. From The Stormlight Archives, by Brandon Sanderson.

Okay, I think it is possibly a bit unfair to list the parshendi in this list of vile and villainous creatures, but the parshendi of the shattered plains make an intriguing enemy to the lords of Alethi.  The parshendi have red marbled skin, and strong muscular bodies.  The bodies are covered in what appears at first to be armour, but on closer examination turns out to be a shell like carapace that grows from the parshendi themselves.  They have the ability to change form when they are exposed to one of the magic infused storms that rage across the shattered plains.  The forms are as follows – warform, workform, mateform, dullform, nimbleform, and stormform.  Each form has different characteristics that are useful for different tasks.  However, originally the parshendi had no control over which form they take when exposed to a storm, it being completely random.  However, their war with the humans changed this when they discovered that capturing ‘spren’ the magical spirits that inhabit the world, could allow them to control which form they take.  The war was started when the parshendi hired a shin assassin to kill the Alethi king, however the human’s discovery of Gemstones on the shattered plains – and the human’s insatiable greed for them – possibly means that the parshendi got more than they bargained for. 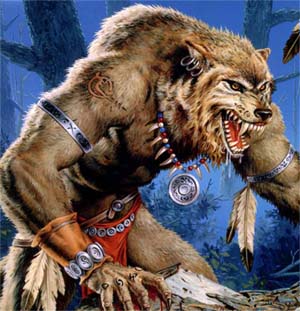 Joining.  From The King beyond the Gate, by David Gemmell.

The ancients devised wondrous machines that could cure all forms of ailments, injury and disabilities, by fusing the strength and vitality of wild animals to their human hosts, curing terrible afflictions and permanently fixing broken spines and twisted limbs.  The ancients knew the importance of making sure that it was controlled carefully, to make sure that the beast bonded to the human was never able to take control, and that the human always was always left as the dominant will.  Alas, centuries later, that wisdom is lost, and the ancient machines – when discovered unexpectedly – are used to join all manner of beasts to the once human hosts.

At first these cruel experiments are only used in gladiatorial shows, being the by-product of unfortunate criminals being joined with animals leaving them completely brutal in nature, ignorant of their former existence, and as wild and vicious as the animals they were bonded with.  However, soon the twisted and insane emperor realises that he can dispose of his enemies in this way, and the forces that oppose him.  Forming an army of joinings unbeatable on the battlefield through their strength and ferocity.  Their only weakness: a strong reminder to the human host of their former lives, so that they can once again remember who they once were. 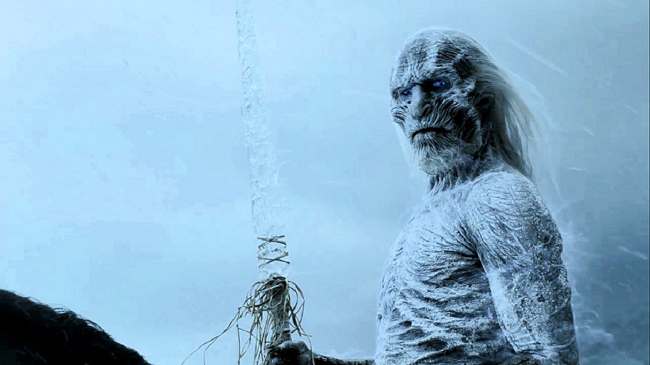 Whilst the great families of Seven Kingdoms squabble over the right to hold the Iron throne, an ancient evil is beginning to awake far to the north, beyond the Wall.  Eight thousand years have passed since the winter of the long night, when the white walkers last travelled south, killing all in their path, and then terrifyingly raising those same dead to fight by their side.

The white walkers have the ability to freeze everything they come into contact with, and matching swords with them with anything other than Valyrian steel or dragonglass will leave opponents blades shattered – and a living death as a reanimated corpse, likely to result.  They are distinguished by their bright ice-blue eyes that shine from their frozen faces, something that their re-animated corpses share once risen.

Eight thousand years before they had been driven back, into the lands of always winter, by the first men and the children of the forest, by using dragonglass and the magic of the children.  The Wall was then constructed to protect the realms of the living, with the Nights Watch as guardians, protecting all from the grip of the forces of winter.  Alas, eight thousand years is a long time, and the Nights Watch isn’t what it once was.  Will the families of the Seven Kingdoms wake up and realise their peril? Who knows, but either way, winter is coming….