What is it that makes someone rebel against insurmountable odds? When an occupying force or despot King or Queen holds complete power over you, why do some still somehow find the power to say no, and rebel against their all-powerful overlord?

Sometimes the reason can be the sheer brutality of their rulers, whilst others are inspired by an idea or a fierce sense of independence.  Either way, they are a constant presence throughout history.  Some were successful, most were not, but they left an indelible mark on history to inspire others.   Here are a few of my favourites… 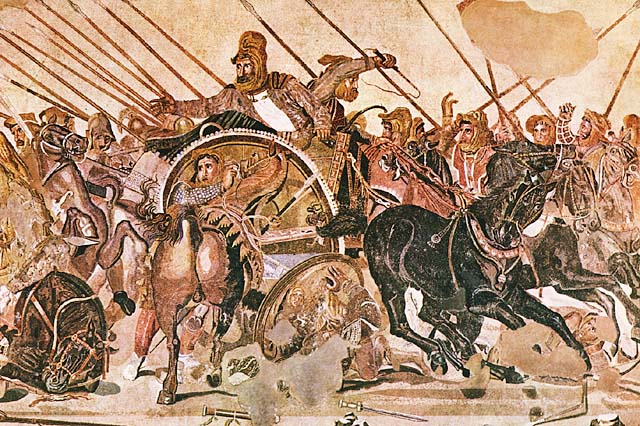 Bessus.  Alexander the Great is possibly the greatest conqueror of all time, he swept into Asia defeating the Persians at Granicus and Issus, before driving into the heartland of the Persian Empire and crushed the vast Persian host at Gaugamela.  After taking the Persian capitals of Susa, Persepolis, and Babylon his complete dominance of the ancient world seemed complete.  However one man thought differently, Bessus, a one-time ally of the Persia Emperor Darius.  Darius was fleeing Alexander, but was murdered by Bessus who then declared himself Emperor of Persia and fortified himself in his mountain stronghold in Bactria (modern day Afghanistan).  Alexander pursued him, intent on killing this pretender to his throne, and took the greatest army of its day into Bactria.  However, what he found in Bactria was a very different type of foe, as its inhabitants employed guerrilla tactics against a superior force – possibly for the first time in recorded history.  The Ancient historian Plutarch described the Bactarian warriors as a hydra-headed monster, as soon as you cut off one head, three more would appear in their place.  It started a military tradition in this region, that has thwarted many super-powers over the millennia: The British (19th Century), the Russians (20th Century) the Americans and allies (21st Century).   Alexander eventually caught up with Bessus, put him to death and managed to pacify the region.  But this was only achieved by building countless fortresses, and leaving a sizable occupation force that persisted in Asia for centuries – and why many Afghans still show the signs of Hellenic heritage in the colour of their eyes and fair skin. 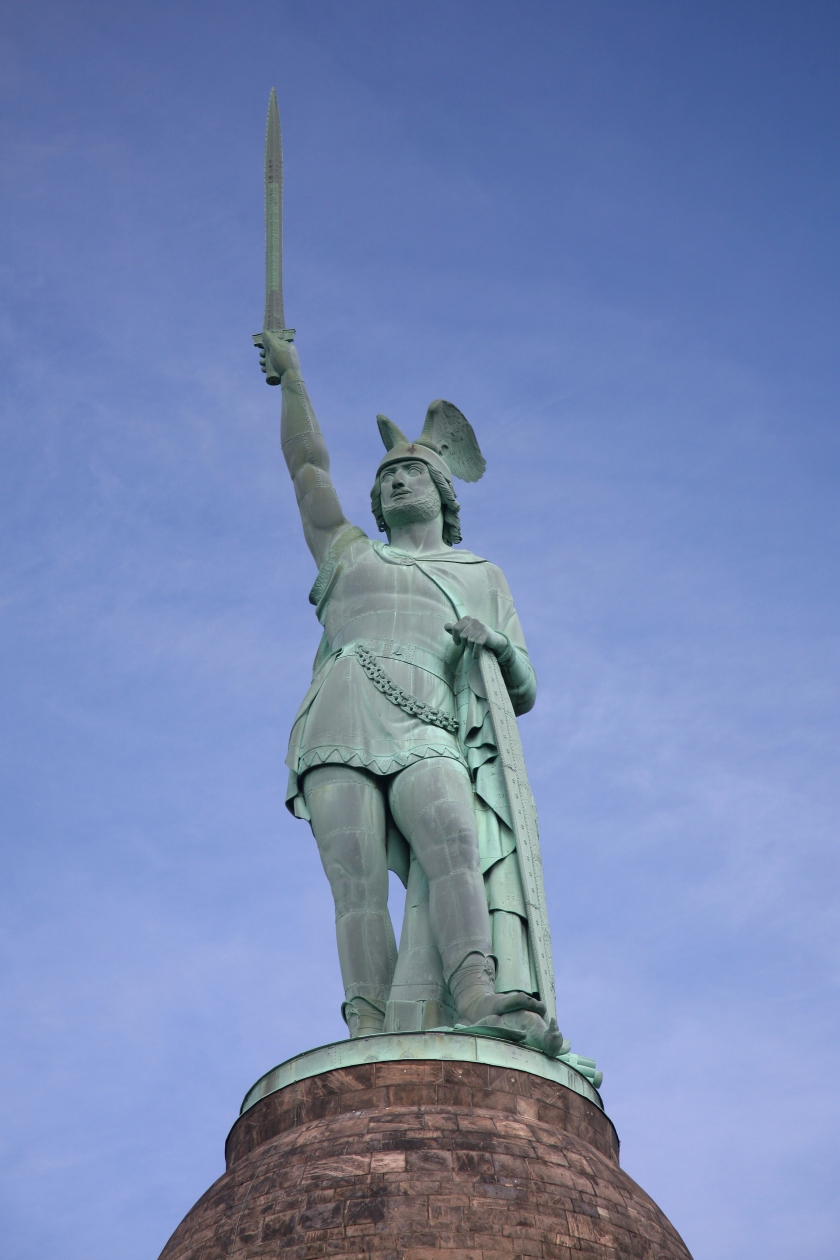 Arminius.  The Romans thought they were finally on the brink of pacifying the new Roman province of Germany for good.  They had everything on their side, the greatest army of its day; unstoppable in the field through their military discipline and sophisticated war tactics.  They also had managed to help place one of their own, a German prince educated in the Roman fashion who had served with distinction in the Roman legions, as King of the Cherusci – one of the largest German tribes.  What could possibly go wrong?

What went wrong was that the German King Arminius who’d been placed at the head of the Cherusci nation with the help of Roman gold, was in fact a viper.  As they’d taught him all they knew, he knew exactly how best to beat the Romans.  He orchestrated a brilliant ambush in the Teutoburg forest, utilizing Roman-style fortifications and battle tactics to help defeat and destroy three entire legions in possibly Rome’s greatest ever defeat at the height of her power.

Boudica.  One of the hardest lessons for all Empires to learn is that after the conquest is completed, it is always best to rule with a conciliatory hand, and to try and rule with consent rather than with the iron fist.  The Romans were normally quite good at this, coming up with the Pax Romana the Roman peace that typified the Empire at its height.  However, they sometimes forgot this lesson with disastrous results.

Queen Boudica was married to King Prasutagus, King of the Iceni and a vassal to Rome.  On his death he left the Roman Emperor co-heir to his Kingdom along with his two daughters.  However, the Roman governor Paulinus wasn’t content with half a kingdom so he had his widow Boudica publicly flogged and her two daughters raped.  This act of barbarity (and stupidity) led the Iceni, Trinobantes, and many other British tribes to Rebel against Roman rule.  With the fearsome Boudica at their head – tall, fierce eyed, wild red-hair that fell to her hips – they tore through Roman Britain, routing a Roman army and destroying the Roman settlement of Camulodunum (Colchester) which was inhabited by the families of retired Roman veterans.  They stormed and burned Londinium (London) and Verulamium (St Albans) after the defenders fled.  Rome finally confronted Boudica in a showdown in the midlands of the country.  Boudica exhorted her massive army to great bravery by riding before her host before the battle in her chariot, escorted by her defiled daughters.  However, the superior battle tactics of Paulinus who chose a narrow gorge, and a forest at his rear, to protect his flanks, was combined with the tight discipline of the Romans and they destroyed the Iceni army.  80,000 British men, women, and children lay dead after the battle and Boudica herself took her own life by poison rather than be taken alive by the Romans.

Salah al-Din.  From the moment that Pope Urban II declared the first Christian crusade to reclaim the Holy land in 1096, Christendom and the forces of Islam were at war.  By 1099 the Kingdom of Jerusalem was formed, and under Christian control.  However, this long war was far from done.  Salah al-Din, known as Saladin to his Christian enemies, won his reputation by bringing Aleppo, Damascus and Mosul under his control until his eventual confrontation with the Christian forces at the battle of Hattin in 1187.  He was aided by his brilliant cavalry, the most famous of which were the Mamluks.  They were Turkish slave-soldiers purchased as young boys from Christian or Pagan regions, and trained in the art of cavalry warfare, taught Arabic, and encouraged to convert to Islam.

The battle of Hattin was decisive in his favour, capturing King Guy of Jerusalem.  Salah al-Din took control of Jerusalem and many of the crusader held kingdoms but Christendom wasn’t ready to give up control of the Holy Land and so another crusade, this time under Richard 1st “the Lion-heart” was formed.  The conflict lasted another 100 years as the fortunes of each side ebbed and flowed, but by 1297 when Acre fell to Muslim forces, the crusades could be said to be done. 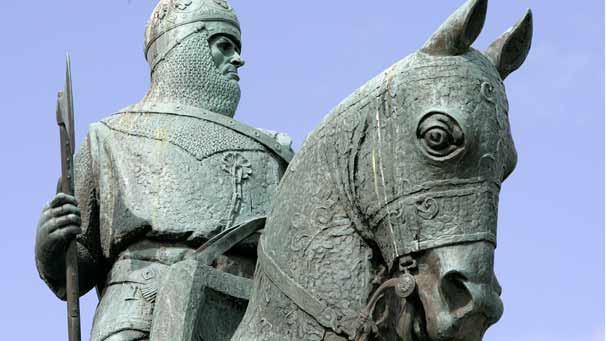 Robert the Bruce.  People my wonder why I have choosen Robert the Bruce as a Scottish rebel, rather than William Wallace who started the revolt against Edward I of England’s overlordship of Scotland.  But I think William Wallace had had enough praise in recent years with Mel Gibson’s (vastly inaccurate) film of his life.  So I think it’s important to recognise the role Robert the Bruce played in giving Scotland their independence.

Although Robert the Bruce supported Wallace’s rebellion, after it failed, Edward I didn’t confiscate his lands, and instead Bruce became a guardian of Scotland in Edward’s name.  However, Bruce argued and then killed on of his fellow guardians – John Red Comyn and found himself on the wrong side of the law, being pursued by Edward I and excommunicated by the Pope.

Bruce crowned himself King of the Scots in 1306 but after a defeat to Edward I at Methven, he was forced to flee to an Island off the coast of Ireland.  His wife and daughters were captured and imprisoned while his brothers were executed.  Whilst in hiding, Bruce allegedly was inspired by a spider that refused to give up making its web despite adversity, and this gave Bruce the strength of will to return to his homeland.  Bruce began a very successful guerrilla war against the pro-English forces, and when Edward I died, to be replaced by his far weaker and less capable son, the war began to turn in Bruce’s favour.  After taking several English fortresses and rendering them useless to the English invaders, Bruce met Edwards II’s forces at the battle of Bannockburn. The Scots won a resounding victory and Edward II fled the country.

Bruce took the final English stronghold in 1318 and when Edward II was deposed by his own wife Isabella in 1327 the English finally renounced their claim to the Scottish throne. 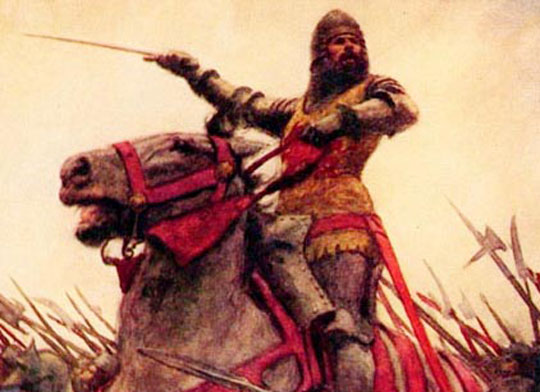 Owain Glyn Dwr. He was descended from the former Princes of Powys, but despite being of grand Welsh heritage Owain Glyn Dwr didn’t begin life as an obvious candidate to spark revolution against the English crown that ruled Wales in the fifteenth century.  In fact he fought for many English wars against the Scots and served in the English fleet.

However, when Henry IV of England seised the throne from Richard II, forces moved against Owain.  Not one to be pushed around, Owain declared himself Prince of Wales and led the great Welsh revolt of the 1400’s against Henry IV’s rule.

A brilliant commander he initially only united a small band of followers, but his successes led to the revolt spreading throughout Northern and central Wales.  Great victories followed at Mynydd Hyddgen and Bryn Glas and led to the revolt uniting the whole of Wales, as seasoned warriors returned from fighting England’s wars to stand for Owain and Wales.

Eventually however, Owain’s lack of a naval fleet and any artillery of note, prevented him from taking many of the vital English fortresses along the coast.  These fortresses gave the English King the upper hand, and forced Owain into hiding.  He then disappears from history, despite many vast rewards by the English king for his capture.  He was never betrayed or captured, leading to legends that he will at one time return….