For the past week and a half I’ve been staying in a small cottage up in the wild hills of Northumberland, one of England’s two counties that lie on the border with Scotland.  Evidence of previous animosity between the two countries are all around, not just with Hadrian’s Wall that runs through the borderlands, but in the number of castles and fortified buildings that lie festooned over the countryside.  My own cottage that I am staying in still has arrow slits in the outbuildings, a relic from its past when the inhabitants needed to defend themselves from the periodic raiding parties from the Scottish North.

This has made me think about borderlands in literature, and what a great location they are to set any novel.  Obviously history is full of hostile frontiers, and next week I will go through a few of those and show some examples.  But equally this works well for fantasy novels, and here are just a few great examples of fantasy novelists that have used this topic so well. 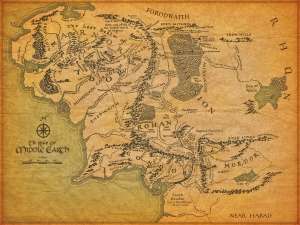 Mordor, Middle Earth.  The Lord of the Rings by J R R Tolkien.  What a great place to start!  The Dark Lord Sauron’s land is defended by the Black-Gate and although a back door exists through a winding-stair, this has a nasty big spider to protect it and a tower full of Orcs.  This means that most of the hostility between Mordor and its neighbour’s Gondor and Rohan take place around the cities of Minas Tirith and Osgiliath and the river of Anduin.  The unforgettable battle before Minas Tirith when Éowyn smites the Witch-King of Angmar is one that lasts long into the memory. 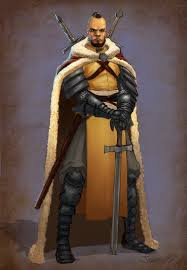 The Blight, Wheel of Time series by Robert Jordan.  The Blight is not only full of Trollocks and Fades, and all number of unwholesome beasts, it also destroys anything it touches, spoiling crops and any land it devours.  To halt its progress, the borderlands of Shienar, Arafel, Saldaea, and Kandor exist to keep the Trollocks and their evil masters at bay.  The men of the borderlands are just what you would expect from a frontier – tough, unyielding, and a lifetime wedded to the sword.

The lands of the Drenai, Legend and other Drenai novels by David Gemmell.  The vast steps to the North of the Drenai are populated by the hordes of the Nadir, a warlike people that fight along the steps and threaten the peace and civilisation of the Drenai.  Fortunately they have Dros Delnoch to protect them, a magnificent fortress with many walls to withstand the unstoppable Nadir Hordes…it just requires the right leader to motivate the men – here enters Druss the Legend.

The Forests of the Specks.  The Soldier Son Trilogy, Robin Hobb.  This frontier is different from the others, as it involves two different people with different philosophies in life.  One is concerned with the advance of civilization, and onward march of progress through the wilds.  The other wants to conserve their forest, their customs, and their way of life.  The connections to our own world are obvious, but it is interesting how people’s views have changed on this subject – if I was writing this article one hundred years ago, or even fifty, most readers sympathies would be with the explorers, but a modern reader is more likely to want to respect the rights of the aboriginal peoples.  The conflicting viewpoints in this series are just as pronounced, and is an interesting subject for that reason. 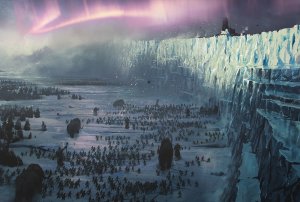 The Wall – Game of Thrones, George R R Martin.  The wall of ice that protects the land of Westoros from the Others, and Wildlings of the frozen North.  George Martin claims he was inspired by this whilst visiting Hadrian’s Wall in Northumberland, so it is fitting that I have come full circle.  Westoros’ Wall has stood for a thousand years and is guarded by the Nights watch, a brotherhood of men united by their oaths of allegiance and a common purpose – fantastic!

I’m sure there are many more examples in fantasy novels…if so, post them here.