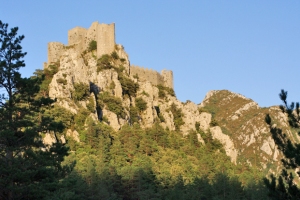 Montsegur, Southern France.  Unless you know your European history well, you might be unaware that there was another branch of Christianity once.  They were called the Cathars and were based mainly in Southern France in the 12th and 13th century.  Alas, they fell out with the Catholic Church, who declared them heretics and with the co-operation of the French King pursued a religious crusade to wipe them out.  The Cathar’s last stand was held in this tiny castle in the Pyrenees.  A year long siege was ended by a daring raid of French knights who climbed up the cliffs to take the castle in the night.  The Catholic Church then burnt the 225 Cathar priests alive at the foot of the mountain (they apologised in 1979). 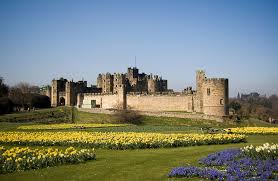 Alnwick Castle, Northumberland UK.  I had to have this one on the list because it used to be my favourite as a child.  My grandmother had dinner mats of different English castles in her cottage in Northumberland.  I used to always insist I had Alnwick castle because I thought it was such a fine looking castle – and it still is! The seat of the Duke of Northumberland, the English guardian of the North whose role used to involve keeping the troublesome Scots their side of the border. 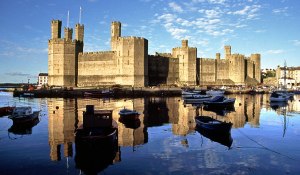 Caernarfon, Wales, UK. Edward 1st of England has been described as a great a terrible King and he certainly wasn’t a man of half measures.  Before becoming the infamous ‘Hammer of the Scots’ he needed to put the Principality of Wales in its place, and put an end to the many rebellions that sprang up periodically from that land.  His method was building a long chain of castles through North Wales, the traditional heartland of the rebellions.  From this point on, any uprising will need to involve the taking of several large castles.  Caernarfon is one of the larger ones. 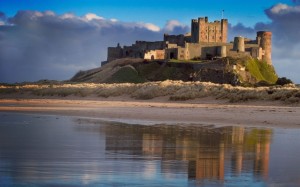 Bamburgh Castle, Northumberland UK.  Another border castle this one, nestled along the Northumbrian coast.  What is so amazing about Bamburgh is the stunning setting.  You can walk for mile either side of the castle along Northumberland’s unspoilt and beautiful coastline, taking in views of the magnificent castle along the way.  Historically, it was a vital fortress in the defence of the North coast of England, but also interestingly Sir Thomas Mallory considered Bamburgh to be the site of Lancelot’s mythical Arthurian castle, ‘Joyous Gard’. 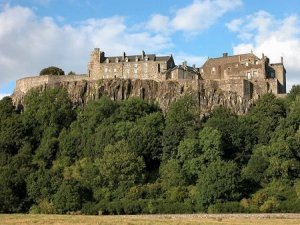 Stirling Castle, Scotland UK.  Possibly the most important castle in Scotland, Stirling comes up time and again in Scotland’s wars with her neighbour England.  Holding Scotland depended on taking the great fortress and both sides took it and lost it during Scotland’s wars of independence.  In 1297 it was the site of William Wallace’s great victory of Stirling Bridge when a sizable English army was chopped to bits by their Scottish cousins. 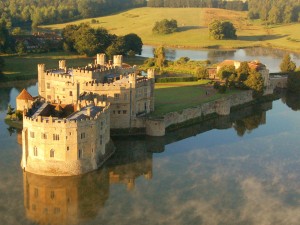 Leeds Castle, Kent UK. Leeds castle might not have seen the same kind of action as those in the borderlands of England and Scotland or the troubled regions of North Wales, but I’ve always thought Leeds is a beautifully designed castle with its fairy-tale perfect lines and large moat.  Possibly this is the closest to how we imagined castles in our childhood. 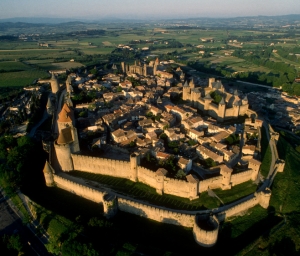 Carcassonne, France.  A citadel this time, rather than a castle in the traditional sense.  What’s great about visiting Carcasonne is how the outer wall still circles the great citadel rather than being buried in a sprawl of newly constructed houses.  Great if you want wander around the wall or discover the cities narrow and winding streets.  The extensive reconstruction in the 1850’s mean that the fortress is in good repair although some may feel that this means the citadel lost some of its medieval integrity with the works. 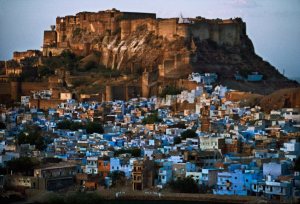 Mehrangarh Fort, Jodhpur India.  If some of the previous castles were grand in their ambition, they have nothing against the great fortress that dominates the skyline of India’s beautiful Blue city of Jodhpur.  It was named after a man called ‘Raja Ram Meghwal’ who was buried alive in its foundations in return for his family’s prosperity.  This was thought to ensure the forts good fortunes, and it has proved so in one respect, the descendants of Raja Ram Meghwal still live in the estate gifted to them by Roa Jodha, the chieftain who built the great fortress.  The sheer size and power of this stronghold strike you as soon as you enter the city and stays with you long after you leave it.

Jaisalmer, The Golden City India.  Another citadel this time, Jaisalmer is a magnificent golden city rising from the deserts of Rajasthan.  It was the scene of many ancient battles, and after its capture in the 13th century many of the forts women committed Jauhar or mass suicide rather than endure the attention of the invaders.  However it successfully repulsed one of the Moghul emperors in 1541 proving taking this great fortress was far from easy.  I always thought of it like a great sandcastle – absolutely magnificent. 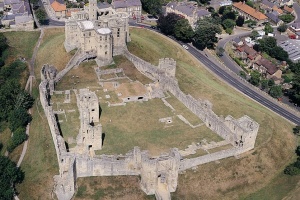 Warkworth, Northumberland UK. I’ve left this one until last as this in my (current) favourite.  There are much larger or spectacular castles than Warkworth, but I like it because it represents everything I love about castles.  It is slightly ruined, which is a good thing because it means it retains its authentic integrity – rather than being converted into a glorified stately home.  It also has a colourful past, being involved in many sieges and battles – therefore, it is a real castle, and not a pretend folly of some Lord or Baron.  It is also old with a dour and imposing appearance – this was a castle built for war, and nothing else.  Built around 1157 it was first raided in 1174, was twice besieged by the Scots (unsuccessfully) in 1327, had a leading role in the War of the Roses, and was damaged in a siege during the English Civil war in 1648.

Many of you will love Castles that I have missed from this list, this isn’t a definitive list, it is just my 10.  If you have some of your own, let me know in the comments below!