Most of us have a vague understanding of the story of Cleopatra, the exotic Egyptian Queen who first seduced the mighty Julius Caesar, before falling for Mark Antony, and the tragic end to her story.  However, most know little of her remarkable family’s story, the descendants of the line of Ptolemy who had ruled Egypt since the time of Alexander the Great.  Their stories are no less remarkable, and more often than not, just as tragic.

For the sake of simplicity, where possible, I have listed the characters by their epithet or ‘nickname.’ This was a convention the Greeks first used to distinguish them apart as they all tended to have the same name (A lot of Ptolemys) which is very confusing!

The Father – Auletes. When Ptolemy XI of Egypt died without a male heir, the next in line was Auletes, who was the illegitimate son of a previous ruler name Soter (by an unknown concubine).  He was then quickly married to his own sister Tryphaena to strengthen the line and his claim.  His name Auletes came from his flute playing, but in truth he was a licentious drunkard.  After angering the populace of Egypt in 58 BC with his wasteful lifestyle and for paying the Romans exorbitant bribes to secure his throne, he needed to flee to Rome for his own safety, leaving Egypt in control of his wife Tryphaena and eldest daughter Berenice.

The elder sister- Berenice.  After her father fled she was left as co-regent with her mother.  However, Berenice wasn’t one for sharing power, so she had her mother poisoned.  She became under pressure from the public to take a husband and married Prince Seleucus Kybiosaktes.  This marriage unfortunately didn’t last long as Berenice had him strangled so she could rule alone.  Her reign ended when her father returned to Egypt with a Roman army under his pay.  His father promptly beheaded her and all her supporters.

Auletes (again!). After his return he ruled for another four years before his lavish lifestyle led to his death.  He left in his will the throne of Egypt to his son Theos and daughter Cleopatra – crucially with Rome as the executors of the will, to ensure the succession.

The Brother – Theos Philopator.  At the age of 10 he became co-ruler with his more famous sister Cleopatra in 51BC.  He and his eunuch Pothinus – who was rumoured to be the power behind the throne – became aggrieved with Cleopatra’s increasing status as queen (it was her head that adorned Egypt’s coins) so they forced her to flee Egypt to Syria.

Meanwhile, defeated Roman General Pompey the Great came to Egypt seeking refuge from Julius Caesar.  Theos and Pothinus had Pompey murdered to try and curry favour with the now victorious Julius Caesar, and presented Caesar with Pompey’s head when he came to visit.  Instead of being pleased, Caesar was furious and insured Pompey’s body was given a proper burial.

Whilst Caesar stayed in the palace of Alexandria, Cleopatra sneaked herself into his presence by hiding in a rolled up carpet.  She then seduced the Roman dictator and was thereby installed as ruler.  Pothinus was executed by Caesar and Theos joined his forces with his younger sister Arsinoe.  Julius Caesar only had a small force with him, so Theos and Arsinoe were confident of victory as their forces far outnumbered the Romans.  Alas for Theos, Julius Caesar was a general without peer and he defeated the Egyptian army.  When his reinforcements arrived, he forced Theos to flee, where upon Theos drowned trying to cross the Nile. 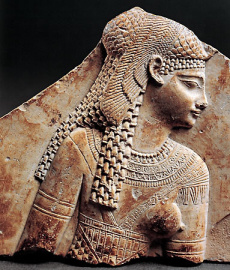 The younger sister – Arsinoe.  Arsione was captured by Julius Caesar and transported to Rome where she was forced to appear in Caesar’s triumph.  She was marched through Rome’s streets trailing behind Julius Caesars chariot in front of the jubilant Roman crowd.  Traditionally prominent prisoners were strangled at the end of a triumph, but Caesar spared Arsinoe and exiled her to live in the Temple of Artemis in Euphesus.  Here she lived for a few more years, but unfortunately Cleopatra never trusted her and persuaded Mark Antony (more of him later) to have her killed on the steps of the temple in 41 BC.  An act that scandalised Rome, due to the temple’s status as a place of sanctuary.

The younger brother – Ptolemy XIV. After the death of Theos, Cleopatra declared herself co-ruler with her younger brother Ptolemy, and then married him to strengthen the claim – despite remaining as Julius Caesars’ lover.  Ptolemy was a year younger than Theos and even easier to control so Cleopatra effectively ruled Egypt.

After the assassination of Caesar in Rome on the ides of March 44 BC, Cleopatra poisoned Ptolemy and instead declared Ceasarion, her son by Caesar, co-ruler in his place.

A queen like no other – Cleopatra.   Unfortunately for Cleopatra, Caesar had never formally recognised his son with Cleopatra, and there were other heirs to Julius Caesars’ Empire.  So she could only watch and wait as the Roman Empire warred against itself after the death of Caesar.  After the battle of Philippi the conspirators who assassinated Caesar were defeated and Cleopatra was summoned by Mark Antony to judge her loyalty.  However, she knew men and soon managed to ingratiate herself with Mark Antony and bend him to her will.  Antony followed her to Alexandria as the Roman Empire was divided up between Antony and Caesar’s nephew and acknowledged heir Octavian.

Cleopatra gave Mark Antony a daughter and two twin boys, so her position in Egypt seemed assured.  However, Mark Antony embarked on an invasion of Parthia which ended in failure.  He returned to the loving embrace of Cleopatra but was now weakened.  Octavian used the influence of Cleopatra to poison Roman public opinion against him, and before too long Octavian’s forces met those of Antony and Cleopatra’s at the naval battle of Actium.  The reason this battle was fought at sea was down to Cleopatra’s insistence, as she had bought and maintained Antony’s fleet.   This wasn’t a wise choice, and after Antony’s battle plan was betrayed to Octavian’s forces, they found themselves out manoeuvred.  When Antony and Cleopatra sailed away, the majority of their forces gave up fighting and surrendered.

The final battle was outside Alexandria in 30 BC, nearly 20 years after Cleopatra had first ascended the throne after the death of her father.  Octavian’s troop’s easily overpowered Antony’s remaining men, and after falsely hearing of Cleopatra’s death, Antony stabbed himself.  Cleopatra tried to negotiate with Octavian, but not wanting to be paraded through Rome in Octavian’s triumph, she killed herself via the bite of an asp.

The son – Caesarion.  Surprisingly Octavian Caesar spared the lives of Mark Antony’s and Cleopatra’s daughter and twin boys, but he wasn’t so lenient on Caesarion, who not only bore Octivian’s uncle’s name but also inherited his looks and manner.  An advisor named Didymus told him, ‘too many Caesar’s is not good’. So Octavian had the seventeen year old Caesarion strangled.

The daughter – Selene.  Cleopatra’s daughter and two twin boys Helios and Philandelphos were paraded through Rome in Octavian Caesar’s triumph in heavy gold chains that they could barely carry.  They were then given to Octavian’s sister to raise.  The twins then disappear from history, possibly through illness, but also possibly through murder.  However, the daughter Selene survived and was married to King Juba of Numidia.  Together they formed the kingdom of Mauretania (modern day Algeria) and she bore him two children.  She died somewhere between AD 4 and AD 17 (historians disagree on the date) and left the following eulogy,

The moon herself grew dark, rising at sunset,

Covering her suffering in the night,

Because she saw the beautiful namesake, Selene,

With her she had the beauty of her light in common,

And mingled her own darkness with her death,