The Saxon.  After the Romans left the shores of Britain, the Saxons started to arrive on its shores.  Fair haired muscular warriors from the North German plain, their progress was allegedly held up by the legendary King Arthur.  But after his demise the impeding tide could only be held back for so long, and eventually the Anglo-Saxon Kingdoms of England were formed from Northumbria in the North, through to Mercia in the midlands, and Wessex and Kent in the south.

The Viking.  The English Kingdoms peace was shattered in the ninth century by the Danes, who decided to come Viking and take what was on offer from the rich and prosperous land.  The sight of their dreaded longboats is one of the most feared images from history.  The Vikings came first to raid, but then realised they preferred England to Denmark and settled in the North of England – their progress South being thwarted by Alfred the Great’s Anglo-Saxon Wessex.

The Normans.  Contrary to what many people think, the Normans were not actually French. They were the Viking invaders from Denmark, Norway, and Iceland who had taken control of the northern region of France, Normandy, before swearing allegiance to the French King.  They were very accomplished in war, and had a very large and skilled army which invaded England in 1066.  Their disciplined army manged to get the upper hand against the Saxons in the Battle of Hastings, by feigning a retreat and tricking the Saxons into conceding the higher ground.

The Celtic warrior.  The Celts may have been forced to the fringes of the British Isles by a combination of the Anglo-Saxons, Vikings, and Normans, but they were far from finished as warriors.  The Welsh often rebelled and the mountainous terrain to the North of Wales proved particularly hazardous to the Normans until they built a series of Castles to maintain their rule.  The Picts and Scottish nations to the North waged continual wars of independence whilst the Irish kept their Island a Celtic stronghold. 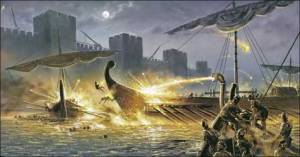 The Byzantine.  In the East of Europe, the legacy of the Romans still held sway.  The Byzantines were the descendants of the Eastern Roman Empire first formed by the Roman Emperor Constantine.  Their armies still held the discipline of the old Roman legions, and their cavalry was also renowned.  However, it was their use of Greek-fire in their navel battles that struck fear in their opponents.  Made from a mysterious and secret recipe, Greek-fire was flammable and had the ability to float on water and consume any ship or unfortunate person caught in its path. 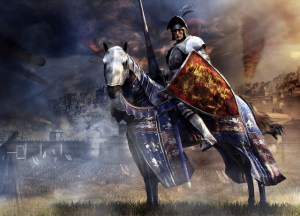 The Medieval Knight.  Mounted on his charger, lance in hand, encased head to toe in burnished steel, the knight was equally at home on the battlefield as the tourney field.  Unlike a Man-at-Arms who may be a mercenary or another type of professional fighter, the Knight was of noble birth and rank. Seemingly invincible in their heavy armour and skill with weapons, they held a high status throughout Christendom.  A knight was more than a warrior, he exemplified an age, and was held to a chivalric code espousing honour and courage.

The Longbowman.  Knights in armour however, were not as invulnerable as they appeared.  Their nemesis was the English Longbow that proved so decisive in the Hundred Years war.  A succession of battles, such as Crecy and Agincourt, were won by small, largely peasant, English armies against vastly larger French armies of Knights and Men-at-Arms.   The secret of the longbow was its ability to penetrate plate armour and also by how many arrows a skilled bowmen could release quickly – being far faster than the slower and more cumbersome crossbow used by most other European nations.  Learning to use an English longbow was no easy task however, and required the user to train from a very young age. 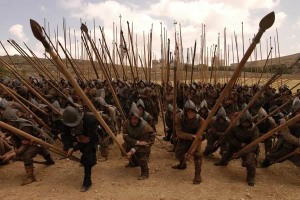 The Pikeman.  The pike was nothing new, it had been used in ancient times, most notably by Alexander the Great, but it had fell out of use in the subsequent centuries until making a comeback in medieval times.  A tightly organised unit of Pikemen had the advantage of being impervious to heavy cavalry and could also be used offensively to stunning effect, such as in the Scott’s famous victory over the English at Stirling Bridge in 1297.  The Pikemen did have weaknesses however, over broken terrain their units could lose cohesion and leave them vulnerable.  They were also always at risk from archers, unless adequately armoured.

The Crusader and the Knight Templar.  Sent by the Pope and a coalition of European rulers to secure the Holy land for Christendom, the crusaders left a path of destruction all the way to the gates of Jerusalem.  The Knights Templar were their personification, a secretive religious order of warrior knights, vowed to celibacy, whose mission was to escort and protect christian pilgrims on their way to the Holy land.  They became extremely powerful due to the ciphers and banking systems they deployed to look after the pilgrims wealth as they made the long and perilous journey to Jerusalem.

The Mamluks. The crusaders didn’t have a free rein in the Middle East however, they came across the formidable army of the great Salah ad-Din (Saladin) who crushed the crusading army at the battle of Haltin in 1187 and re-took Jerusalem.  This sparked Richard I of England (Known as The Lionheart) to launch the third crusade to reclaim the Holy Land.

Salah ad-Din’s army was famous for its brilliant cavalry, the most famous of which were the Mamluks.  They were Turkish slave-soldiers purchased as young boys from Christian or Pagan regions, and trained in the art of cavalry warfare, taught Arabic, and encouraged to convert to Islam.  They were then freed to serve in Salah ad-Din’s army and were highly skilled with spear, composite bow, axe and sword.  They were also heavily armoured, and wore the distinctive conical helmet and face mail mask.