What is it that connects us to the events of the past? We can certainly learn history through literature or other forms of media, but sometimes the connection goes much deeper than this.  This is especially the case if we have a local or family connection to those same events.   Is it through the memories passed down the generations? Or Possibly through items left behind,  such as pieces of jewelry or family heirlooms?  Or maybe it is the land itself which forms an intrinsic bond with those who live in its hills, fields, and forests – a link that remains over the centuries?

This is the intriguing subject of the new novel ‘Shades of Time’ by Sandra Dennis.  She has very kindly offered to write a guest post on her novel and why she felt compelled to write it, so I’ll pass you over to her… 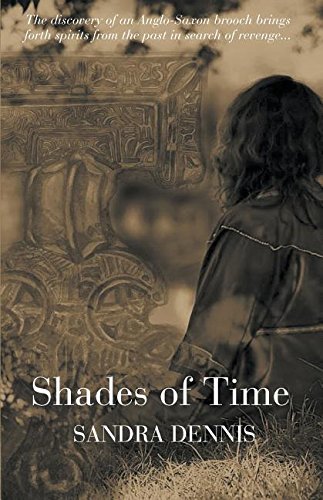 I had to write ‘Shades of Time’, there was no getting away from this story which was inspired by real people living in the same nearby community as I do over a thousand years ago.
When I moved to the Cotswolds 10 years ago I found out that there had been a large and significant Anglo-Saxon community and burial ground in the town of Lechlade-on-Thames. This seemingly small, rural town was once a settlement for the Anglo-Saxons, where a very different way of life would have been lived than today, on the banks of the River Thames in Gloucestershire. The more I discovered about the archaeological dig that had taken place, the more curious I became…Who were
the people that had lived there? What was it like in Lechlade in the 5th Century? Most importantly of all – who was the woman, whose body was buried in a grave full of very valuable items – including that of a rare, square-headed, bronze brooch. Was she a ‘princess’ as they had thought?
Having moved from Kent to Gloucestershire, I was interested in discovering some of the local history; a deep interest of mine. The local library had a small booklet about the dig and not much more.
Another coincidence was when I took a trip to the museum in Cirencester, a nearby town which was known as Corinium in Roman times. To my astonishment I found that they had an exhibition dedicated completely to the finds they had discovered in Lechlade. Before me lay the reconstructed body of the Saxon woman who inspired me to write her story…however fictional!
Therefore ‘Mildryth’ was created: a young woman who had lived in a Cotswold, rural community nearly fifteen hundred years before me; her family, her friends – her enemies.
Mildryth’s story didn’t end in the 5th Century, something prevented that from happening and it took from then until the 21st Century for the conclusion to be reached – Shades of Time is a time-slip novel in which the ties of family and community are never really severed and how our ancestors are all part of our own story, whether we like it or not.

Also available from the Corinium Museum in Cirencester: Website

Or through Amazon.com or Amazon.co.uk

Sandra Dennis lives in the Cotswolds with her family, two cats and mad spaniel.
Having read English and American Literature at the University of Kent, she gained an upper second-class degree (with Hons). After this, Sandra went on to teach English for many years before becoming a full-time writer and private tutor of English and Creative writing. She has just launched her debut novel ‘Shades of Time’ after having success with short stories and historical articles.
Sandra enjoys the outdoors: running, cycling, walking the dog; theatre; history; reading and writing; good food and wine.