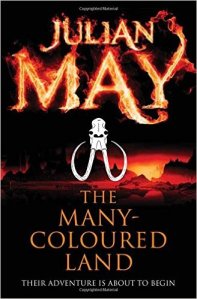 Okay!! I know what you’re thinking! How can you call this a fantasy novel? This is surely Sci-fi, after-all it starts in 22nd century Earth?  Not only that, the plot includes two exiled warring alien races.  Surely Sci-fi right?  Well no, not really, and that’s because the Saga of the Exiles series, which starts with The Many Coloured Land, actually reads far more like a fantasy novel than anything else.  That’s because the advanced technology of the 22nd century has given Earth’s inhabitants the ability to create a time portal back to Earth’s Pliocene Era (basically six million years ago, long after the dinosaurs but before the arrival of man).  The time portal is a one way trip, so only the 22nd century’s discontents, disenfranchised, and the odd criminal are willing to make the journey, seeking a technology-free wilderness on the other side.

What they find instead is the exiled warring alien race, users of powerful mind powers, who have also cast aside the advanced technology that took them to our world. The wilderness of the early Earth forms the battleground between the two alien races, and the unfortunate humans who travel back in time only to find that the aliens want to enslave them.

I know you’re still probably thinking, that’s definitely Sci-fi, but honestly when I read it I found it to be more like a fantasy novel.  Technology has been cast aside, and the mind powers – which can be given to the humans too using alien artifacts – gives them powers that would be at home in any fantasy novel.

It is a clever series, and for those of you who yearn to live in a fantasy world with magic, giant beasts, and an untamed wilderness, these books actually give you a story-line that can take you there…

You can buy this novel from Amazon here.