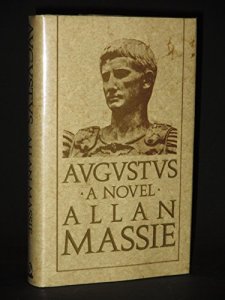 If you really like your Roman Imperial history, or would like to learn more, this is a great place to start.  Alan Massie’s novel on Augustus is both detailed and engaging, an excellent commentary on the man who probably did more to shape the Roman Empire than any other – high praise when you consider Julius Caesar is on that list.

Augustus is largely accepted as Rome’s first Emperor (Julius Caesar was dictator for life) and although Augustus preferred to go by the term ‘princeps’ or first citizen, he completely reformed Rome’s old Republic into an imperial super-power capable of controlling the vast lands and provinces that stretched through Europe, Asia, and Northern Africa.

Alan Massie’s novel is a fictional memoir from Augustus, as he recounts his life.  It is divided into two parts.  The first is recounted by a middle aged Emperor in a triumphant tone as he retells the period of the civil wars which followed the assassination of his uncle, Julius Caesar.  He tells of his ascension to power as, with the help of his general Aggripa, and his one-time ally Mark Anthony, they defeat the forces of his uncle’s assassins.  He doesn’t shy away from the dark period afterwards for Rome’s elite, when he and Mark Anthony oversee the proscriptions, as the two of them put black marks against the names of those who had opposed them and strip them of all they own before condemning them to death or banishment.

In the second part of the novel, we join Augustus much later in life, when he decides to continue his recollection.  I normally don’t like it when a book is divided up in this way as it spoils the immersion in the story, but as Augustus ruled for so long, it is difficult to see how Massie could have done it in any other way.  The intervening decades of prosperity for Rome might not have been thrilling reading.  In any case, Massie does it brilliantly, the tone changes as the aging Emperor reaches his later years, being sombre and sad after he is greatly affected by the deaths of his heirs and two grandsons Gaius and Lucius Caesar.   The second part teaches us all of Augustus’ startling achievements over his long reign, how he transformed virtually every aspect of the great Empire and set up the foundations that would see it dominate the world for the best part of four to five hundred years – quite a legacy.  We then hear the aging Emperor’s hopes and fears for his succession, as the thoughts of his family and those around him, turn towards life after his death.

This is a fascinating book, full of well researched historical detail – for anyone interested in Roman history, this surely has to be a must read.  You can buy it here.