You can’t beat a castle to form a dramatic setting for a novel.  If you are writing a story from the past, you can steep it with the historical detail so beloved of the genre.  Equally, if you are writing a fantasy novel, you can let your imagination run free as you create a great stronghold.  One of my favourite aspects of George R. R. Martin’s Game of Thrones is the number of incredibly expansive and spectacular castles, all uniquely different, that form the seats of power for all the great families.

If you want some pointers where to start, here are 10 to get you going. 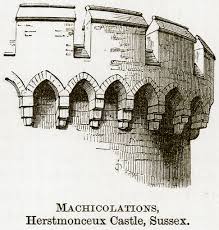 Battlements and Machicolations.  A few crossbowmen along the battlements go a long way to deter any but the most determined attacker, but if necessary, you can have machicolations – stone boxes that project from the wall and had holes in the floor – ready to pour boiling oil, rocks, or any other nastiness down on the poor unfortunates below.

Arrow slits.  Such a simple design disguise what an effective defence these unobtrusive small slits in the curtain wall or towers can be. Built correctly, they will give the archer inside the castle a wide scope for shooting their arrows, whilst the attacker will only have a tiny slit to aim at.

Towers and keeps. Castle builders can really get carried away here.  Spires, turrets, and a large combination of flanking towers can surround the curtain wall, whilst the main keep should overshadow them all.  The Keep is the last ditch defence of the castle as well as the high lookout point of the castle.  Towers were originally square, as that was easier to build.  When they realised that the corners represented a weak point, later designs incorporated round towers as they were more difficult to tear down.

Multiple curtain walls.  Just as the attackers think they have made it into the fortress, by either climbing over or knocking down the great curtain wall in the way, they find another wall waiting for them – and as this dawns on them, they are trapped in a deadly kill zone or ‘death hole’ as it was called.   Beaumaris Castle in North Wales is a great example of multiple walls forming a formidable defence.

Murder holes. Just the name says it all, openings in the ceilings near the gate or in the passage directly behind the gate is where they are usually located, used to pour bloody murder down on the poor unfortunately below. 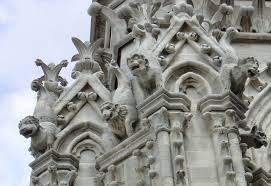 Gargoyles.  If you have an artistic flair, why not disguise your murder holes with a few gruesome stone gargoyles with suitably grotesque features.  Turning an otherwise austere castle into a real gothic nightmare.

Gatehouse and Portcullis.  Any castle is only as strong as its gate, the saying goes.  Fortunately there are a number of defences that you have on your side.  As well as a drawbridge, you can deploy a Portcullis for rapid closure to your stronghold, a few flanking towers to rain arrows down on your attackers, and second inner gates separated by murder holes.  Your gatehouse can become the strongest point in your fortress rather than its weak point.

Siege-engines.  As castle designs can become so proficient in repelling invaders, the machines that are needed to gain entry become ever more advanced and cunning.  You have catapults, mangonels, and giant trebuchets to hurl rocks, pitch and fire at (or over) the walls, and siege towers to pour men over the top of them.  Iron shod battering rams with leather clad frames to protect those swinging it can gain you access through the gates or anything but the thickest and strongest walls. 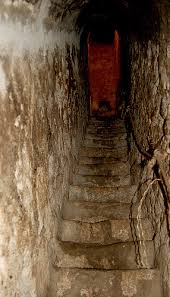 Secret passages. A hidden maze of corridors and stairways existing behind a castle’s thick walls.  A large network of spy holes and listening points can be riddled throughout the great building.  Of course, secret passages are only useful if they remain that way, so liquidation of unfortunate builders may prove necessary. 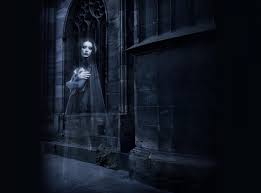 Castle ghost.  Every self-respecting castle needs its own ghost.  You need someone to haunt the long cold passageways and make noises in the night.  A suitably tragic back story, full of betrayal and unrequited love can normally be relied upon to be the reason why they’ve return from the grave.