I was eleven years old, when I first read The Lord of the Rings, and it changed my life.  I’d been a sporadic reader up until that point, occasionally reading a book when bored, or reading something to appease my parents.  But I soon realised as I slowly made my way through all three volumes over a long hot summer in the mid-eighties, that The Lord of the Rings was different.  This was a book that I loved. So much so, that from that point on I became an avid reader.  I was then always known to be the boy with a book in his hands, desperately wanting to recapture that feeling of complete immersion in a world far removed from my own.  Be it fantasy novels or historical, throughout university and beyond, the sight of me carrying a book or with a novel stuffed in a coat pocket or bag was so common that it was only remarked upon on the rare occasion it was missing.

The attraction of escapism is obvious, but this wasn’t the first fantasy novel I’d read, and none had gripped me like this.  In hindsight, I probably should have started with the Hobbit, but I didn’t, I plunged straight into Tolkien’s main work (another year passed until I picked up a copy of the Hobbit).  But it didn’t really matter, the first book in the series starts off in a similar vein to the Hobbit, in the nice and cosy Shire, with pleasant discussions on party business and types of Hobbit ale and tobacco.  It was only when I was quite far into The Fellowship of the Ring that I felt my imagination hooked, and by the time they descended into the mines of Moria, I’d lost myself completely to the story.

Strangely enough, one of my favourite characters was – and still is – Boromir, and I have no idea why? Possibly, even back then I was drawn to flawed characters.  Either way, his death moved me, but I loved how he had redeemed himself trying to rescue Merry and Pippin from the orcs, and I guess I’ve always loved stories of redemption from that point on.

But despite Boromir’s death, The Lord of the Rings hadn’t lost its grip on me, and just as Merry and Pippin were captured and forced to run with the orcs, I was dragged along by the story, never taking breath until the incredible battle at Helms Deep, the ultimate thrill of excitement as the Riders of Rohan, with the help of Aragorn, Legolas, and Gimli hold back the endless hordes of Uruk Hai. 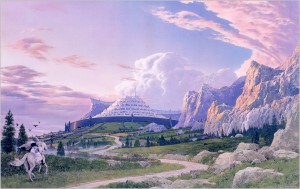 I was a slow reader back then, and even now I’ve never been truly convinced of the merits of skim reading, or rushing through a novel.  So it was getting late in the summer when the I reached The Return of the King, and I felt I’d been on a long journey too, alongside Frodo, Sam and Gollum, as the Ring is finally returned to the fires of Mount Doom.

As autumn approached, the sense of loss I felt at nearing the end of the book was reflected in the scouring of the Shire, as the Hobbits returned to a disappointing homecoming in their land.  As the Ring-bearers finally departed to the West, I returned to school, but I was changed forever.  Now I have grown up and become an author myself, writing my own novel Roman Mask. I’ve fallen for many novels over the years, but just as with any first love, none will ever have such a strong impact as The Lord of the Rings.