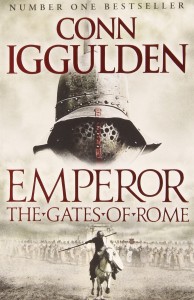 When a famous character of the past is depicted in a novel, where do you start?  Normally the proscribed path would be to research the history books, find out where he or she first comes to the attention of the historians and start your story there.  However, with some historical figures that means that you don’t pick up their story until they are approaching middle age, and you learn nothing of what shaped their character or motivated them through their youth.  That’s certainly the case with Julius Caesar; by the time he started conquering Gaul he was already in his forties and often bemoaned the fact that Alexander the Great managed to achieve so much – he conquered all the lands from Greece to India – by the age of thirty.

So rather than wait until Julius Caesar has become a successful Senator and skillful politician, Conn Iggulden, in his novel ‘Gates of Rome’ has gone right back to the beginning and starts his story when Julius – or Gaius as he goes by then – is just a child, growing up with his best friend Marcus, on a farm outside of Rome.  It is a great lesson in going back to the roots of a character and learning what the author feels may have shaped their youth, inspired them, or drove them to succeed beyond all expectation.

The story centres around the two youths, Gaius and Marcus, being guided by their tutor and mentor – a retired gladiator – who not only teaches them to fight, but also pushes them to excessive limits – and in so doing, brings a whole new concept to the notion of tough love.  It’s an incredibly enjoyable and fast paced novel, and you can clearly recognise the influence of the brilliant fantasy writer David Gemmell, who Conn Iggulden attributes as a great inspiration to his writing.  The story rattles along with rich and colourful characters at every turn.  It shows that the veil between historical and fantasy writing is much thinner than many would suppose.

Gates of Rome is one of my favourite historical novels and sets up the four book series brilliantly as you see the two boys grow to manhood and then embark on the careers that the history books have recorded and we now know.  If you haven’t already read this novel, I can’t recommend this book enough, if you love your history told with an exciting edge and at great pace, I know you’ll love it!

You can purchase the novel on Amazon here.